Here's a very brief history of the Goral (Highlander) people, who originated in and around the Tatra mountains.

By 1000 A.D., the original Celts, Saxons and Slavs living together around the Tatras for seven centuries had finally mixed and a new mostly-Slavic culture began to form. In the 1200s more Germans, Slovaks, Poles, Wallachians (Romanian & Baltic shepherds), and Russians arrived. The largest influx of settlers came in the mid-1500s when many Germans arrived from Levoca, Slovakia, Wallachian shepherds from the Carpathians, Poles from Zywiec, and Hungarian nobles from southern Slovakia, all given special privileges by the king. 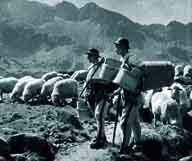 In the 1600s an influx of fleeing peasants from Zywiec, Sucha and Wadowice, Poland joined them. Out of this crucible in remote and rugged country of battling the harsh climate, infertile soil, invading armies, and oppressive rulers a highland culture emerged. The 1600s really marked the maturing of the Goral's culture: its distinct dialect, farming practices, architecture, dress, music, cuisine and mindset.
By this time the Gorals settled all around the Tatras, but were mainly concentrated in far northern Orava, Slovakia, the Podhale area of Poland (north side of the Tatras), in the Pieniny mountains to the east, and northern Spis county, Slovakia. They have always been a very independent people and loved their "Szlebodu" or freedom as they say it in their Goral dialect. In 1651 they rose up and ousted a particularly feared tyrant named Mikolaj Komorowski who ruled Zywiec, Nowy Targ and Zakopane. Their ornate costumes of wool and flax are very regional in design, but the men's trousers bare the kind of military stripes once common to Hungarian troops in Orava and Liptov counties in Slovakia.
In the years of World War II the Goral were much persecuted and killed by German troops. They responded by fighting the Nazis as partisan freedom fighters and keeping open the courier routes across the Tatras. The Goral are revered

throughout the Slavic world -- especially in Poland -- for their wisdom, self-sufficient nature, hard work ethic, and bravery. And their rich cultural dress, music, tales of the mountains, and hearty cuisine are also beloved. The majestic Tatra mountains are still where they feel most at home. And many people are discovering the colorful beauty of their culture, their kindness, and their unique farming and shepherding inhabitants. These are the Goral. For more on their history, visit the Tatra-Area Timeline. To see what areas they've called home visit the Goral Map.